I recognize that this is somewhat tongue-in-cheek, but this Launchsquad post is the worst, at least in how it deals with Oxford commas. I like the Oxford comma, but this post is not going to be a defense of it. Instead, let’s look at the stylistic and logical problems with this post.

The second sentence of this article starts with “[w]e believe that proper use of the serial comma will make your story sound clear, smart and professional….” Great. Why do you believe that? Unless you have a reason, this an argument by assertion. Compare that with: 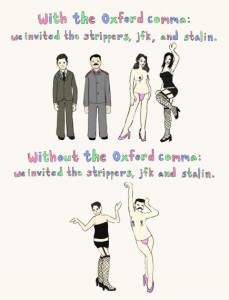 The second one is better, because it provides a reason why using the Oxford comma promotes clarity. And not to pile on, but they are not “using” the serial comma.
Next, this article switches terms for the same thing. In sentence two, it’s a “serial comma,” while in the quote below, it’s an “Oxford comma.” That would be bad enough, but the quote has another problem.   It claims that in America, we shouldn’t use it because it’s foreign. That’s essentially the genetic fallacy, and not even a sensible version of it;  as the author of this piece knows, it’s also called a serial comma. And you’d think that editors based in Boston would know that it can also be called a “Harvard comma.”

Even worse, the only other argument is an appeal to authority (“according to the AP Style.”) Who cares? Unless you are told to use the AP Style guide for everything, you can use other style guides (there are other style guides that prefer the Oxford comma,) and which might be better systems for your work.  Or, even better, choose the rule you prefer, or finally, and best, have a valid argument as to why using the serial comma is preferable.

One thought on “Vampires of Boston”